The Year 12 History and Politics trip to Washington DC proved to be historic in more ways than one.

Not only was it the first ever CBSC trip to the US capitol but it arrived just in time for the “Snowzilla” storm that engulfed the US east coast… students would be part of history as well as studying it! While the snow limited access to many attractions we managed to visit Ford’s Theatre (where Lincoln was assassinated), the Washington Monument, the Lincoln Memorial, the Martin Luther King Memorial and the Second World War Memorial. Students also saw Arlington Cemetery, walked around the Capitol Building grounds and saw democracy in action as rival groups of pro-life and pro-choice abortion activists protested outside the Supreme Court. Confronted with the protest and fully aware of the impending historic dump of snow our students did what any self-respecting Carshalton Boy would do… they procured some unwanted protest placards to use as makeshift sledges! Walking around deserted Washington streets and seeing iconic sights covered in fresh snow is an experience all involved will never forget. Add in snowball fights outside the White House and sledging at the Washington Monument it certainly proved to be a memorable trip. 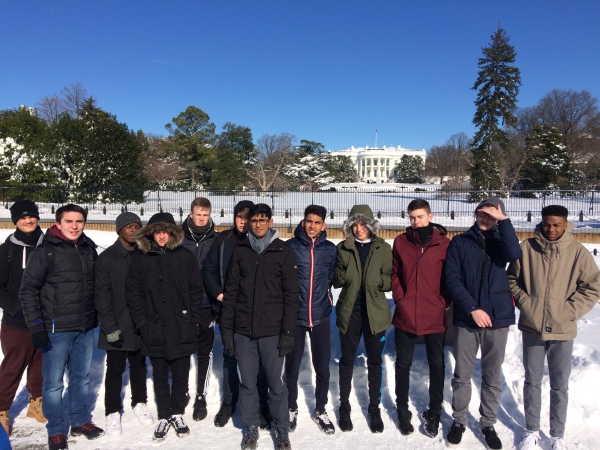